I can’t believe the release day for Blood Bound is less than a month away! It’ll be here on January 12th. I can’t wait to share this story with the world! While we’re waiting, I thought it would be fun to share a scene that was removed from the book. This scene was originally a prologue that takes place about 20 years before the events of the book, and shows how Miria and Azalea were taken to the underground vampire city, Terra Nocturne. It was cut because it didn’t quite flow well with the rest of the book, and the beginning was better off without it.

Please keep in mind – this scene was cut before I sent the book to the editor, so this scene is unedited. There may be some minor errors that I missed.

I hope you enjoy this bonus deleted scene from Blood Bound! Don’t forget to pre-order the book on Amazon if you haven’t already! 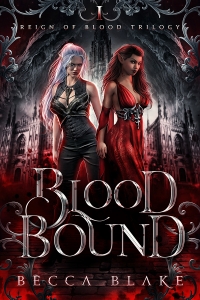 “Miria, wait! We’re not supposed to go so far out of town without an adult!” Azalea pulled her skirts up to keep them from catching on the jagged rocks beneath her feet. She climbed after her best friend, who had slipped beyond her line of sight. They needed to get home for dinner, before the sun started to sink beneath the trees and the moon took to the skies.

The towering buildings of Viridi were behind them, an ever-present reminder that they weren’t far from safety. Still, the further they traveled into the woods, the more they risked running into the dangerous creatures who lurked there at night.

As if to remind Azalea that they’d ventured too far, a wolf howled in the distance. She froze and tugged the shawl around her arms tighter. “Miria?” she called out, trying to ignore the soft trembling of her voice.

She spun around, searching the trees for any sign of Miria’s distinct silver ponytail, but she found nothing other than a chill breeze that blew a flurry of red leaves around her. She didn’t know the woods as well as her friend did. Without Miria as a guide, Azalea wasn’t sure where to go.

The last of the rays of sunlight dipped behind the trees, and the woods grew darker with every passing moment. As a nine-year-old elven girl, Azalea’s vision hadn’t fully developed yet. She couldn’t see in the dark the way adults could.

At least she’d thought to bring along a flashlight.

She pulled it out of her pack and flipped the switch. The small leyline crystal inside flickered faintly for a few moments before illuminating the path before her.

This time, she was greeted by a high-pitched shriek that echoed in the distance. Her desire to save her best friend overpowered the fear she felt for herself, and she sprinted toward the sound.

She ran until she found a clearing, where she saw Miria huddled behind a rock. A huge, black wolf towered behind her, prowling closer to her hiding spot.

Black wolves were the symbol of Nyxa.

They were an omen of death.

Miria pulled her knees to her chest, letting the silver strands of her ponytail spill across the laced leather pants she wore. She wiped away the tears that streaked down her cheeks.

Miria was brave. She never cried.

Azalea met her gaze as she looked up, and Miria waved her hands wildly to shoo her away.

Instead of listening, Azalea bolted forward into the clearing. She didn’t know what she intended to do, with no way to defend herself or her friend, but she wouldn’t stand by and watch Miria die alone.

The wolf turned its attention to Azalea and snarled. It lunged at her with the full force of its body and slammed her into the ground.

Azalea screamed and brought her hands up to shield her face.

Miria, no longer frozen in place, leaped onto the creature’s back and pulled it away. The wolf let out a howl as it shook its thick body, flinging Miria away. She rolled across the field of yellow flowers and slammed into the rock she’d been hiding behind only moments before.

“Miria!” Azalea screeched. She jumped to her feet and limped toward the other girl as fast as her injured leg would allow.

The wolf jumped after Miria, landing on her stomach. Its claws scraped across her torso, drawing blood. Miria screamed.

The wolf opened its jaw in a hungry snarl just above her face.

Before it could attack again, something else leaped out of the darkness and flew into it, knocking it away from the two girls. A tall man with dark hair and round, human ears jumped to his feet. He unsheathed the sword at his hip and faced the creature, waiting for it to come for him.

Azalea scrambled over to Miria and peeled up her tunic. The white fabric was torn to shreds, and her skin beneath it didn’t look much better. Azalea had never seen so much blood. She swallowed back her nausea and covered the wound with her shawl.

“She’s going to die!” Azalea turned around to look at the stranger. “Help us!”

He glanced in their direction just long enough for the wolf to tackle him to the ground. The man lifted his sword and plunged it into the creature on top of him. The wolf yelped and backed away, but the stranger didn’t let it escape. He dove after it and, with a swift strike, he beheaded the creature.

The man sheathed his bloody blade and raced over to the girls. He knelt down beside Miria and examined her wound. “She is lucky. It’s not deep.”

“Close your eyes,” the stranger said, his voice soft and soothing.

Azalea obeyed the command, squeezing her eyes shut tight. When he told her she could open them again, she looked down at Miria. Though there was still blood dripping down her belly, the wounds had closed up, leaving her skin smooth and unmarked where they had once been.

Azalea backed away slowly from the man, eyes wide. Magic had been gone for thousands of years. It wasn’t supposed to exist anymore. Even in ancient times, back when magic was common, the humans never had any.

But somehow, this man did have some kind of magic. If he saved them both and healed Miria, he couldn’t be terrible, right?

“She will live,” the stranger said.

“What are you?” Miria asked. Her voice was still hoarse and scared, but at least she no longer gasped from the pain.

“My name is Nero Cineris,” the man said, offering them a small, tight-lipped smile.

She turned to face the man, then dipped into a curtsy. “I’m Azalea, and this is Miria. We’re in your debt, my lord. Thank you for saving us.”

Miria got to her feet and pushed in front of Azalea, knocking the man’s hand away. “Thanks for saving us and everything, but we really need to get home now.”

Azalea nodded. “Our parents will be worried.”

“Why don’t you both join me for dinner first? I don’t live far. As you said, you owe me a debt.”

Azalea had no reason to distrust the man who’d saved them, and she supposed it would be rude to refuse his offer.

It wasn’t until after he’d led them up into the mountains and brought them into a deep, dark cavern that she realized the truth: Nero Cineris never intended to allow them to return at all.

Pre-order the book to find out what happens to Miria and Azalea. Blood Bound releases January 12th!

The first chapter is also available to read here: SNEAK PEEK: CHAPTER ONE OF BLOOD BOUND

Kidnapped by vampires. Held captive for their blood. Escaping could cost them their lives… or worse.