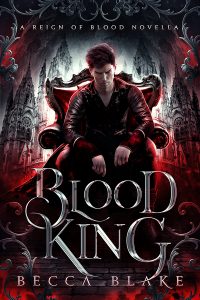 I can’t believe Blood King will be out in the world so soon! I can’t wait to share Nero’s story with you. Blood King is just one of the 22 amazing stories that are included in Darkness Rising. For just 99c, that’s a lot of reading!

Since we’re getting close to release day, I wanted to share an except from Blood King with you guys. Keep reading below!

If you haven’t reserved your copy of Darkness Rising yet, you can do that here: PRE-ORDER BLOOD KING

“They can’t possibly expect you to go out on the ocean during the worst storm Caracta has seen in decades.”

Wind whistled beneath the bridge Nero Cineris and his sister Neryssa called home, pelting them both with cold drops of rain. Neryssa shivered against the stone wall and wrapped her threadbare blanket more tightly around her shoulders.

Nero crouched down beside his twin and squeezed her hand. “They just need me to help secure the boat. I won’t be gone long.” He shrugged off his coat and wrapped it around her, leaving his own arms exposed to the cold air and heavy rainfall.

Neryssa’s dark curls obscured her features as she huddled up against the wall. “Get home safe.”

Nero grinned as he slung his pack over his shoulder. “Always.”

He sprinted out into the empty Caractan streets. His soaked tunic clung to his lean body, leaving his pale skin visible through the thin fabric. Flashes of lightning streaked across the dark afternoon sky, illuminating everything in front of him. A burst of wind wrenched a wooden sign away from the front of a building, and Nero ducked as it flew past his head.

Neryssa was right to think he shouldn’t be outside in the dangerous storm. Earlier, as the clouds gathered over the ocean beyond the docks, the city guards had ridden through the streets, warning everyone to stay inside until it passed.

Nero had no intention of heeding any of their warnings. He’d told Neryssa he was expected to report to the docks, where she believed he worked as a fisherman. None of that was true. He’d never been able to hold a job— not since their parents’ execution.

As soon as they’d come of age, they’d been thrown out onto the streets. Since then, they’d been forced to fend for themselves in a city that refused to allow them to move past their family’s treacherous legacy.

That left Nero no other choice but to take what they needed to survive. It was their only option, but he was too ashamed of their situation to admit to Neryssa that he was a thief. And he certainly didn’t want to admit that he’d chosen to head out into the worst storm they’d ever seen because it was the best time to steal from the boats at the docks. He’d done so plenty of times before. Storms were a common occurrence in Caracta, and the thunder and rain that came with them usually didn’t scare him. This storm, though… this storm was unlike anything he’d ever seen. It was like the elven gods had returned and brought their vengeance with them.

And that meant there would be no one at the docks to stop him from taking anything he wanted from the ships.

The wooden pier creaked as the waves crashed into it. The rainwater that soaked through his tunic had already chilled him to the bone, so he hardly noticed the sea water the waves sprayed onto him as he ran across the dock toward the ships. The rain obscured his vision too much to be picky, so he chose the closest one and leaped across. He gripped the railing, the wood slick from the rainwater, and pulled himself up onto the deck. The boat heaved with the waves, and Nero took a moment to steady himself before heading below deck. As he’d expected, the eerily quiet ship seemed to be deserted for the moment, leaving the path to the storage room unguarded.

Nero opened his pack and began loading it up with jars of peaches and various cheeses, as well as a single bottle of ale. Neryssa wouldn’t want to touch that, but he would enjoy it later.

Nero startled at the sound of a man’s voice, and his pack slipped out of his hands.

The shirtless man held a bottle of ale, and he took a swig as he waited for Nero’s reply.

“You just thought you’d raid this ship while it was stormin’ out.”

“My sister and I are hungry,” Nero said, the words tumbling out of his mouth. “It’s the only way we can survive—”

“We’ve been robbed blind once before during a storm.” A drunk hiccup escaped the man’s throat as he raised the empty bottle above his head. “And we’ve been ordered to never let it happen again. It’s why we’re out here in the middle of this gods-damned storm instead of somewhere safe.”

Nero ducked to avoid the bottle as the man flung it across the small space. It crashed into the shelves, and the glass shattered behind Nero’s head. Jars of food fell to the floor, rolling from one side of the room to the other with the ship’s movement.

“I know your type,” the man said, his voice a scratchy growl. “You think the world belongs to you! That you can take anything you want!”

The wooden shelves dug into his back, and more of the food tumbled to the floor around him. He gripped his pack, heavy with the weight of stolen jars. Nero pressed himself into the corner and reached for one of the daggers sheathed on his belt.

When the sailor lunged for him, Nero plunged the dagger into his thigh.  The man cried out as he fell to the floor. Hoping to escape while he was distracted, Nero stepped over him, but the sailor grabbed him by the leg as he passed.

As Nero fell forward, his cheek slammed into the corner of a shelf. With an explosion of pain, a sharp, coppery taste filled his mouth. His stomach churned from the movement of the ship and the sharp taste on his tongue. He spat out the blood and pulled himself to his feet.

He stumbled out of the storage closet, leaving the sailor calling for help behind him, and hurried down the hallway toward the ladder that led back to the upper deck.

The sailor yelled for help, and a door at the end of the hall swung open. A second sailor stepped out into the narrow hallway behind Nero, looking less drunk and disheveled than the first had been. Nero dove for the ladder and started climbing. The sailor grabbed his leg and tried to pull him back down. Nero kicked wildly at him. The heel of his boot landed right on the man’s jaw, and he stumbled backward.

Nero’s boots slipped on the slick wood as he crawled up onto the deck. The man followed him up the ladder and reached for him once again. This time, he was ready for Nero’s flailing, and he overpowered him with ease. He picked up an unused coil of rope from the deck to bind Nero’s hands together in front of him.

Nero struggled against the rope, but the tight knots wouldn’t budge.

Stormy winds raged around them, and the thunder boomed so loud he could almost feel the vibrations down to his bones.

The man leaned Nero over the ship’s railing. The ocean waves splashed up the side of the ship, spraying cold, salty water onto his face.

The sailor Nero had stabbed climbed up from the lower deck and limped over to them. “Shove him overboard,” he growled. “Let him rot in the depths.”

The other didn’t need much convincing.

Icy water hit Nero like a thousand knives stabbing into him at once. Darkness surrounded him on all sides except above him, where lights from the dock and the flashes of lightning illuminated the surface of the water. He swung his legs, trying to kick himself back to the surface, but without the mobility of his hands he made little progress. He reached his bound hands over to his hip and unsheathed his dagger, then bit down on the hilt.

Water rushed into his mouth and burned his lungs as he sawed away the thick rope that bound his wrists. The rope frayed, coming apart one strand at a time until finally it fell apart and freed his hands. The dagger, its job completed, sank down to the depths below him as Nero swam for the surface. His burning lungs begged for breath. He reached the surface and gasped for air just as another wave crashed over him, shoving him back below.

Nero continued fighting against the pull of the waves, gulping up quick breaths each time he emerged. His arms and legs grew tired from flailing against the powerful, unrelenting force of the water, but he swam until the waves dumped him on the shore. His body weak and exhausted, he closed his eyes and let the darkness take him.

Nero’s story will be available exclusively in the Darkness Rising box set for just 99c, along with 21 other awesome stories. So make sure to pick up Darkness Rising if you don’t want to miss out! 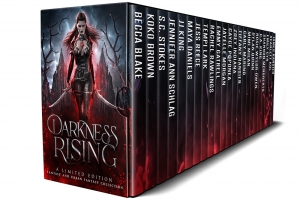